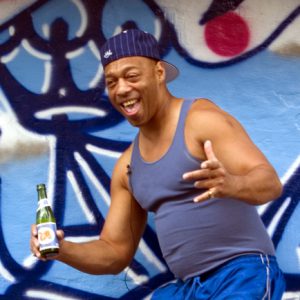 In early 1979 COMET and BLADE sat back and reflected on their amazing graffiti careers. Since 1972, each writer estimated that they had done 5,000 pieces. BLADE memorialized this figure by doing an end-to-end piece that said “piece number 5,000”. The pair had become so bored in 1979 that they resorted to street bombing (un-popular at the time), gridding out small parts of the city and tagging all of the good spots. However even with this new diversion, they were still bored. One night at the Esplanade lay-up they came across four cars freshly painted by the MTA, each writer painted two-car-worms with their names in bold letters. It was an amazing accomplishment, and their peers took notice.

Shortly after doing the now famous whole-cars, COMET and BLADE found themselves back at Esplanade to paint more trains. The four famous cars were also there, and as the writers approached for a closer inspection they became mystified. Someone had crossed out the two COMET whole-cars, and the offending paint was still wet. Searching through the la-up, the two writers eventually found the perpetrators and COMET offered to fight them both. As the posturing went back and forth, BLADE was blindsided while standing atop one of the trains. Hit on the side of the head with a heavy stick, he fell unconscious to the tracks below. As he recounted later “It was crazy, and really cowardly, my head landed right next to the third rail and I could hear the humming sound of the electricity.” COMET was able to help BLADE home, where he was bedridden for two weeks.

That something good could come out of this is the redemptive part of the story. BLADE had been drawing his dreams on the advice of his girlfriend for the last two years, and now, with nothing but time on his hands he took his best drawings out and tweaked them just right for the trains. The images were panoramic in scope, and as he laid in bed he started making notations of the exact colors he’d need to pull them off. Some of the paint he already had, and some would still have to be racked.

In late 1979 BLADE went to the Esplanade lay-up and pulled out a string of whole-cars that have become iconic emblems of the best the subway movement had to offer. Some of the trains, like “The Walking Letters” car had a long life, while others, like “Across the Universe” lasted only a week. Which trains became famous and stayed in service and which didn’t was all a crap shoot. Something left to the fickle gods of graffiti. Undeterred by the impermanence of his masterpieces, BLADE kept painting, adding to his number of 5,000; “I think a lot of it was just momentum, after the Walking Letters car I was getting a great response from the old school writers who wanted to see more like it, that made me want to do the next car even better.”

Outside of the graffiti movement were two photographers who were suitably impressed with BLADE’s new works, their names were Marty Cooper and Henry Chalfant. Both photographers documented the BLADE paintings and in 1984, with the publication of their seminal work Subway Art, the works were seen around the world helping to launch a global graffiti movement. As for COMET and BLADE, both writers continued their careers until 1984, before succumbing to the lure of the fine art world. 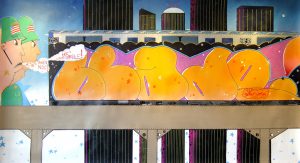